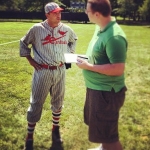 As has become custom in the Oldtime Baseball Game, Azzarello plans to come out of retirement to play in the 2012 game. The award’s inaugural recipient, former Northeastern University outfielder Todd Korchin, began the tradition by playing in the 2010 game. 2011′s recipient, Boston Red Sox scouting coordinator Steve Langone, also played in the game.