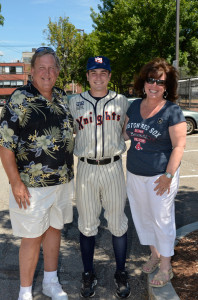 On May 8, 1994, Susan and Sean Flanagan’s lives changed forever. It was on that day, seventeen months after the birth of their son Sean, they realized their child was deaf.

One day later, the Flanagans purchased their first book on American Sign Language. Their infant son’s first sign? He cupped his two little hands together for “ball.” Next, he twirled his index finger to indicate “home run.”

Baseball, it was quickly made apparent, was very important to little Sean “Skip” Flanagan.

When he was old enough to play the game, he set about joining a local league. He was denied entry. No problem: Sean and his parents kept looking until they found a program that would welcome him.

Looking back on it, Skip, using sign language, says, “If they put me down, it makes me stronger.”

Some 12 years later, the Framingham, Mass., native is a sophomore at the Rochester Institute of Technology.

Athletically, he is on the baseball team. Now filled out to a robust six-feet, 175 pounds, Skip is an all-purpose player – pitcher, first baseman and outfielder.

During the summer of 2012, Skip Flangan also made some history when he became the first deaf player to participate in the Oldtime Baseball Game. Wearing a No. 9 Ted Williams Boston Red Sox throwback uniform, the left-handed-hitting Flanagan did the legend of Teddy Ballgame proud, banging out three hits and emerging as Most Valuable Player.

Skip wasn’t supposed to wear the No. 9 Ted Williams uniform. Instead, it was going to be worn by Peter Frates, a former Boston College baseball star who earlier in 2012 was diagnosed with amyotrophic lateral sclerosis, also known as Lou Gehrig’s Disease.

But when Cherington heard Frates had worn No. 3 for his entire career, he made a surprise visit to the game and presented him with a No. 3 Jimmie Foxx throwback jersey. Once the switch was made – right there on the field, during the pregame program – Cherington was left holding the No. 9 shirt. Turns out he had one more surprise: Knowing that Skip is a baseball historian, and that his favorite all-time player is Ted Williams, Cherington called him over and had him change out of his original shirt – that of the fictitious New York Knights of Roy Hobbs fame – and into the Ted shirt.

“It was very special,” Skip said of the opportunity to wear the Ted Williams shirt. “It meant the world to me.”

Or, as his dad put it, “Skip has told everyone that (the game) was the best day of his life . . . storybook stuff that he (and we) will remember forever.”

Flanagan’s fascination with Ted Williams began with a visit to Fenway Park for a Red Sox game – and a chance meeting with Johnny Pesky, the Sox’ longtime player, manager, coach, broadcaster and goodwill ambassador who died this past August.

As Flanagan relays the story, he saw “an old guy wearing No. 6” in the stands. Having read that Pesky’s wife Ruth had recently died, he wanted to pass on his condolences – and did so, with his father interpreting.

“I’m sorry for your loss,” was Skip’s message.

Pesky’s response: “You remind me of Ted Williams.”

Given that Skip had been studying Williams’ swing for years, old Johnny Pesky had proved to be remarkably prescient. Skip also had acquired a deep admiration for how Williams rose from humble beginnings and had overcome so much adversity.

Perhaps the reason he admires Ted Williams most, however, is this: “Home runs are what talk.”

Skip sees himself as a mix of Ted Williams and Curtis Pride, a former major-league baseball player who is deaf. Pride, who now coaches the baseball team at Galluadet University, a school for the deaf and hard of hearing in Washington D.C., met Skip at a Pawtucket Red Sox game at McCoy Stadium in Rhode Island.

“That’s what a real player looks like,” he said.

Being deaf, Skip says, “is not a disability. It’s not the end of the world. You just kind of look around more, become more aware, more intuitive.

During his years at Bishop Feehan High School in Attleboro, Mass., Skip inspired several of hisclassmates to pursue careers as sign language interpreters. But it was one of his own experiences with interpreters that inspired one of his funniest stories. Turns out he was giving a tour of the school to perspective students, aided by a female interpreter; in an attempt to break the ice, he said, “I am a young man, but today I have the voice of a woman.”

Flanagan chose the Rochester Institute of Technology because of its strong academic programs. But it’s also home to the National Technical Institute for the Deaf, which has become home to Skip and 1,300 other students who are deaf or hard of hearing. He’s majoring in sports psychology.

His dream is to open a baseball training complex.

The Oldtime Baseball Game, he said, “is the way it should be played . . . we’re playing for the love of the game.”

But Skip Flanagan, born deaf, has added a new message to the Oldtime Baseball Game.