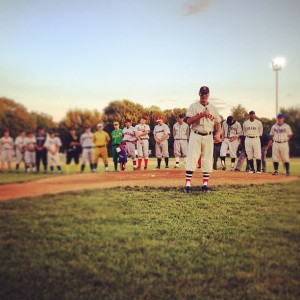 The 19th annual Oldtime Baseball Game reminded me of the film “Field of Dreams” – so much so that I kept waiting for a voice encouraging me to “go the distance.”

As for the film’s signature line – “If you build it, he will come” – that wasn’t necessary. Cambridge’s St. Peter’s Field, home of the Oldtime Baseball Game, was built years ago. And, man, did the fans come – roughly 1,500 of them attended the 2012 edition of the game, which was played as a benefit for the American Red Cross of Eastern Massachusetts.

Fans filled the grandstand at St. Peter’s Field, as well as the first- and third-base foul lines. That’s an Oldtime Baseball Game tradition: Long before the first pitch has been thrown, veteran attendees take over foul territory with their beach chairs and blankets, giving them “reserved seats” once things get under way.

But it’s the uniforms that make the Oldtime Baseball Game what it is. They represent such long-ago teams as the Brooklyn Dodgers, St. Louis Browns and Boston Braves. The minor leagues are represented by such outfits as the San Francisco Seals, Oakland Oaks and Roswell Rockets. The Negro Leagues? The Kansas City Monarchs. The Baltimore Elite Giants. The Detroit Stars. Cuba? The Cienfuegos Elefantes, baby.

The uniforms are loud, colorful . . . and hot. We’re talking flannel. We’re talking August. And the players love it. Considering that most people only see such uniforms in grainy, black-and-white footage from the early days of baseball, it’s quite a treat. 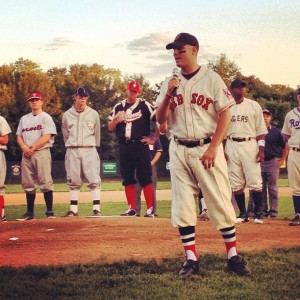 While most of the participants in the Oldtime Baseball Game are current players from New England-area colleges and universities, it was a former collegiate player who set the tone for the evening. Peter Frates, a former captain of the Boston College baseball team, made a symbolic one-pitch start at first base – and this just six months after being diagnosed with amyotrophic lateral sclerosis, otherwise known as Lou Gehrig’s Disease.

Though he was wearing a No. 9 Ted Williams Red Sox throwback uniform when he was introduced, that soon changed – literally. Red Sox general manager Ben Cherington made a surprise appearance during the pregame ceremony, and he had a gift for Frates: A No. 3 Jimmie Foxx Red Sox throwback shirt. Having heard Frates had worn No. 3 throughout his career , Cherington delivered.

Now holding the No. 9 Ted Williams shirt, Cherington made another switch: He gave the uniform top to Skip Flanagan, a sophomore at the Rochester Institute of Technology and ardent baseball historian whose favorite all-time player is . . . Ted Williams.

Skip Flanagan made news on a different front: He became the first deaf player to participate in the Oldtime Baseball Game. Decked out in his Ted Williams unie, Flanagan banged out three hits and was named Most Valuable Player.

While everyone enjoyed turning back the clock to play in an old-fashioned baseball game, they were also helping a great cause, with $41,000 being raised for the American Red Cross of Eastern Mass. Dozens of volunteers worked for months to make the game possible; on game day, many of them toiled from early morning until the end of the night.

The Oldtime Baseball Game has continued to grow, and next year will be its 20th. It’s a great way to celebrate, and embrace, America’s pastime.

Matt Tracy was a baseball operations volunteer assistant at the 2012 Oldtime Baseball Game. A native of Morris, N.Y., he is a senior at Ithaca College.