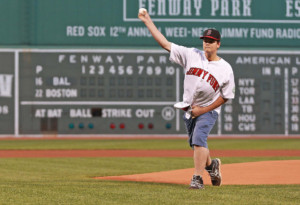 Jordan Leandre, who made national headlines in 2007 when the then-seven-year-old cancer patient sang the national anthem at Fenway Park and then made an inspiring run around the bases, has been selected to play in the 2016 Abbot Financial Management Oldtime Baseball Game, to be played Thursday, August 25 at 7 p.m., at St. Peter’s Field on Sherman Street in North Cambridge.

Leandre, now 16, is a first baseman-pitcher at Dennis-Yarmouth High School. But in 2007 he was recovering from multiple surgeries on his right leg when, on a warm summer night at Fenway, he trotted to first base after singing the national anthem.  And then, as the crowd roared, he continued around the bases.

“I had just been cleared to walk,” said Leandre, now cancer-free and a robust six feet, 220 pounds. “I wasn’t allowed to run yet. But then I went on the radio with (talk-show host) Glenn Ordway, and when I told him I was going to sing the anthem that night, he told me I should run around the bases afterward. I thought he was just joking.

“I don’t quite remember everything that happened,” he said. “What I do remember is everyone just hoping I’d be able to get out of the wheelchair and walk.”

Not only is he out of the wheelchair and walking, he’s a member of the varsity baseball team at Yarmouth-Dennis High and plays in multiple summer leagues. This will be his first appearance in the Oldtime Baseball Game.

Pre-game ceremonies begin at 7 p.m. Admission is free. Former Red Sox infielder Lou Merloni is back for his eighth appearance in the Oldtime Baseball Game.