Put it all together and you have the 20th Annual Abbot Financial Management Oldtime Baseball Game, which will be played on Wednesday, August 21, at 7 p.m. at beautiful St. Peter’s Field on Sherman Street in North Cambridge. This year’s game is being played as a benefit for the Scleroderma Foundation of New England.

The Oldtime Baseball Game is a celebration of our national pastime. From its humble beginnings in 1994, the game has grown considerably over the years yet has remained loyal to its mission of offering a glimpse of what it was like in the old days, when hundreds of fans would turn out to root for their “town” team in various local semipro leagues. 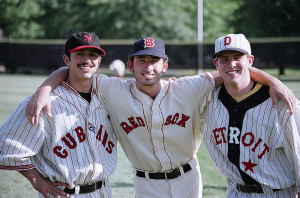 WEEI talk-show host Lou Merloni, who played nine seasons in the major leagues, including six seasons with his hometown Boston Red Sox, will once again come out of retirement to play in this year’s Oldtime Baseball Game. This year will mark Merloni’s sixth appearance in the game.

The game will feature a pregame ceremony to honor another former Red Sox shortstop, the late Johnny Pesky, who was a coach in the Oldtime Baseball Game for 10 years. Pesky’s son, David Pesky, will speak during the ceremony, and legendary Boston toastmaster and Fenway Park public address announcer Dick Flavin will reprise his poem, “Here’s to You, Johnny Pesky,” which he delivered at Pesky’s funeral last August.

Returning to this year’s game as a coach will be former Boston College baseball player Peter Frates, who in 2012 was diagnosed with Amyotrophic Lateral Sclerosis, otherwise known as Lou Gehrig’s Disease. Frates, now director of operations for the BC baseball program, made a dramatic appearance as a player in last year’s game, and the Beverly native has chosen to remain with the Oldtime Baseball Game as a coach.

Skip Flanagan of Framingham, entering his junior year at the Rochester Institute of Technology, will make his second appearance in the Oldtime Baseball Game. Flanagan last year became the first profoundly deaf player to appear in the Oldime Baseball Game and emerged as Most Valuable Player.

The list of first-year players includes Chris McDonough, a former Wheaton College lefthander who broke his arm last fall while pitching in the Yawkey League All-Star Game at Fenway Park. Though the Weymouth native will not be able to pitch again, he is playing in the Yawkey League as a designated hitter and has been invited to make a pinch-hitting appearance  in the Oldtime Baseball Game.

This year’s game is being billed as a “20th class reunion,” as many of the more than 350 players who have appeared since the game’s inception in 1994 will be in attendance.

During pregame ceremonies this year, the fourth annual Greg Montalbano Award will be presented to former Stonehill College player Junior Medina, who played in the Oldtime Baseball Game in 2000 and ’01.

The award, instituted in 2010, is presented to a former participant in the Oldtime Baseball Game who best exemplifies Greg’s spirit, competitiveness and good nature.

As has become custom in the Oldtime Baseball Game, Medina plans to come out of retirement to play in this year’s game and will wear the vintage 1926 St. Louis Cardinals uniform that Montalbano wore in 1998. The award’s inaugural recipient, former Northeastern University outfielder Todd Korchin, began the tradition by playing in the 2010 game.

The Scleroderma Foundation of New England was founded in 1973 as a support system for those with the disease. Scleroderma is an uncommon autoimmune disease affecting an estimated 300,000 people annually. It is one of the 110 serious forms of arthritis and affects people of all ages and races, as well as men and women. (Literally translated, SCLERO  DERMA means “hard skin.”)

Admission to the Oldtime Baseball Game is free. Fans are asked to bring a beach blanket or chair and camp out along the foul lines, as it is the crowd that makes the game so electric.

The rain date for the Oldtime Baseball Game is Thursday, August 22nd, also at 7 p.m.

Media Day for the 20th Annual Oldtime Baseball Game will be held, rain or shine, on Monday, August 12, at 2 p.m. at St. Peter’s Field on Sherman Street in North Cambridge.

Most of the players selected to participate in this year’s game will be in attendance at Media Day, wearing their throwback uniforms.

All participants in the Oldtime Baseball Game who attend Media Day will be available for interviews and photographs.