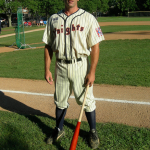 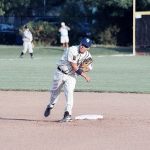 The only fictional team in the Oldtime Baseball Game. Film buffs will recall “The Natural,” in which Robert Redford portrayed a slugger named Roy Hobbs.

Jed Hoyer, who had a stellar career at Wesleyan University both at shortstop and as a pitcher, has gained greater fame as assistant general manager of the Boston Red Sox, San Diego Padres and Chicago Cubs. He came out of retirement in 2006, wearing this uniform when he played the entire game at shortstop. Legendary Boston Bruins play-by-play announcer Jack Edwards of NESN wore it in 2015.