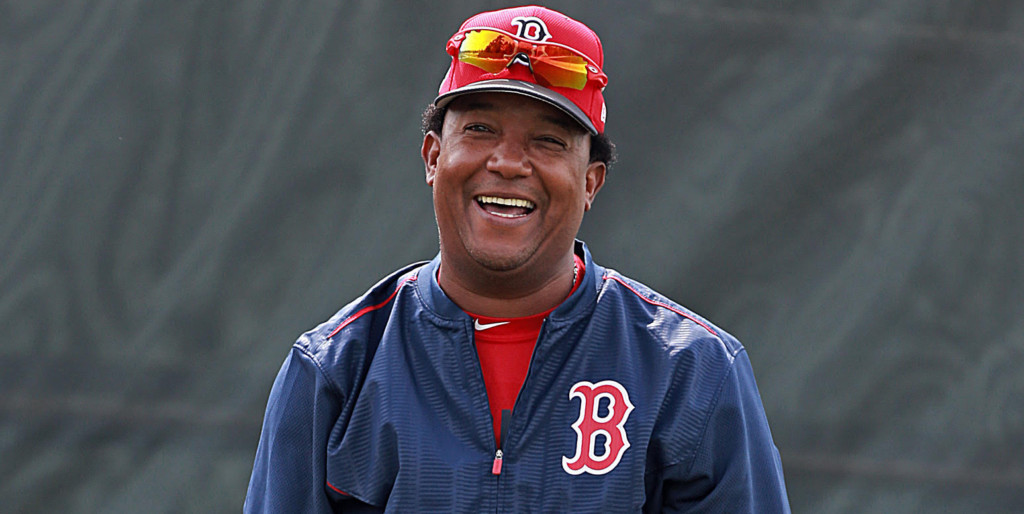 Pedro Martinez, one of the greatest pitchers in baseball history and the ace of the Red Sox’ starting rotation during his seven seasons in Boston, will come out of retirement on Thursday, August 17 to appear in the 24th annual Abbot Financial Management Oldtime Baseball Game at St. Peter’s Field on Sherman Street in North Cambridge.

This year’s game is being played as a dual fundraiser for the John Martin Fund and the ALS Therapy Development Institute.

Martinez, who was inducted into the National Baseball Hall of Fame in 2015, will be reunited with Red Sox infielder Lou Merloni. Martinez pitched for the Red Sox from 1998 through 2004, during which he won two Cy Young Awards, and he was the wining pitcher in Game 3 of the 2004 World Series. His five strikeouts in two innings in the 1999 All-Star Game at Fenway Park is considered one of the greatest moments in the history of the Midsummer Classic.

Merloni, a Framingham native who played nine seasons in the major leagues, including six seasons with the Red Sox, will be appearing in the Oldtime Baseball Game for the ninth time. He is co-host of the popular “Ordway, Merloni and Fauria” program on Sportsradio 93.7 WEEI.

John Martin is a longtime videographer at NESN who has been diagnosed with amyotrophic lateral sclerosis, commonly known as Lou Gehrig’s Disease. He has been with NESN for 19 years, and has been a fixture behind the camera during Red Sox and Bruins telecasts. He was in St. Louis in 2004 when the Red Sox won their first World Series in 86 years, and in Vancouver in 2011 when the Bruins won their first Stanley Cup in 39 years.

Martin and his wife, Adrienne, are the parents of two girls. He also has been involved as a coach in Boston’s fabled South End Little League for 30 years. The John Martin Fund was established to make sure John and his family don’t lose precious time worrying about the financial restraints caused by his diagnosis. To that end, a throng of Martin’s friends in the Boston media, as well as many of his former players from the South End Little League, plan to be in attendance at this year’s Oldtime Baseball Game.

The other beneficiary at this year’s game, Cambridge-based ALS Therapy Development Institute, is a non-profit biotech and the world’s foremost drug discovery center dedicated to finding a cure for ALS.

Located in the heart of Kendall Square, ALS TDI and its scientists work to discover and develop treatments for ALS. It employs more than 30 full-time industry-trained drug development experts and has screened more than 300 drugs since its inception in 1999.

The pre-game ceremony at this year’s Oldtime Baseball Game will include the presentation of the Greg Montalbano Award to Everett native and former Brown University baseball star Matt Nuzzo.

The award, instituted in 2010, is presented to a former participant in the Oldtime Baseball Game who best exemplifies Greg’s spirit, competitiveness and good nature. Nuzzo played in the game in 2005, and again in 2007 and ’08. He later played three seasons of minor-league ball with the Toronto Blue Jays organization.

As has become custom in the Oldtime Baseball Game, Nuzzo, now product manager of baseball and fast-pitch footwear at New Balance,  plans to come out of retirement to play in this year’s game. He will wear the throwback 1927 St. Louis Cardinals uniform that Montalbano wore when he played in the 1998 Oldtime Baseball Game.

The pregame program will also include the presentation of the Bill Novelline Award,  named for longtime Oldtime Baseball Game board member Bill Novelline, who since 1995 has served as the game’s chief fundraiser and goodwill ambassador. This year’s recipient is Roger Morrison of Burlington, a longtime member of the Greater Lowell Umpires Association who began umpiring in the Oldtime Baseball Game in 1995.

Fans are asked to bring a beach blanket or chair and to camp out along the foul lines, as it is the crowd that makes the game so electric. Additional parking is available at the Fresh Pond Shopping Center, where volunteers will guide fans on a roughly nine-minute walk through the back of the Danehy Park Athletic Complex to St. Peter’s Field.

The rain date for the Oldtime Baseball Game is Friday, August 18th, also at 7 p.m.