The ALS Therapy Development Institute (ALS TDI) is the world’s largest ALS-dedicated drug development organization. With 30 full-time, industry trained, drug development experts on staff, the nonprofit institute screens 25-30 compounds a year, and has screened over 300 since its inception in 1999. 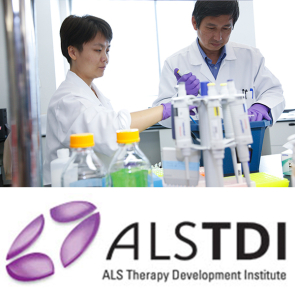 ALS TDI is internationally recognized for its work to optimize preclinical models of neurodegeneration for clinical translation. It has over 15 active partnerships with pharmaceutical companies and other biotech from around the world, and is currently executing a Phase IIA clinical trial of TDI-132 (Novartis’ Gilenya®) in ALS at four clinics in the US. Located in the heart of Kendall Square, Cambridge, ALS TDI is funded by over 150 community grassroots initiatives, foundations, grants, and bequests. Rated a four-star charity by CharityNavigator.com, more than 86% of each dollar raised is spent directly on the Institute’s mission: to discover and develop effective treatments to end ALS. For more information, please visit us online at www.als.net.

There are roughly 30,000 Americans living with ALS, also known as Lou Gehrig’s disease. Every 90 minutes, someone is diagnosed with this progressive neurodegenerative disease causing muscle weakness, paralysis, and respiratory failure. It affects people of all ages, races, and ethnicities.  About 10% of those diagnosed have a genetic form of the disease, while the majority live with a form that has no known cause. There is no cure or effective treatment for ALS.

ALS was first discovered by neurologist Jean-Martin Charcot, MD, in 1865, but it wasn’t until baseball great, Lou Gehrig (1903-1941), was diagnosed with the disease in 1939 that ALS became well-known. A baseball hall-of-famer who played for the New York Yankees from 1923-1939, Gehrig left the game due to the progression of his disease. He gave his farewell speech on July 4, 1939, calling himself “the luckiest man on the face of the earth,” and it has been credited as one of the most emotional moments in American sports history. This year marks the 75th anniversary of Gehrig’s farewell speech.