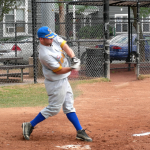 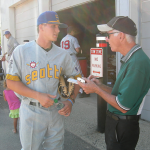 The expansion Seattle Pilots played only one season, relocating to Milwaukee in 1970 and becoming the Brewers. Harper, who stole a whopping 73 bases for the Pilots in 1969, went on to play and coach for the Red Sox.

As a youngster growing up in Longview, Wash., Jim Caple was a fan of the Seattle Pilots,an expansion team that lasted just one season, 1969, before moving to Milwaukee and being reborn as the Milwaukee Brewers. Caple, now a popular sports columnist for ESPN.com, flew from Seattle to Boston in 2006 to wear this uniform in the Oldtime Baseball Game. In 2005 it was worn by University of North Florida pitcher Jeremy Paplebon, younger brother of Red Sox closer Jonathan Papelbon. Jeremy, who joined his twin bother Josh in the 2005 Game, was drafted by the Cubs in 2006. Ryan Edell of the University of California/Irvine, who wore it in 2002, was drafted by the Cleveland Indians in 2005. Patrick Bresnehan of Arizona State, who wore it in 2003, was drafted by the San Diego Padres in 2006.