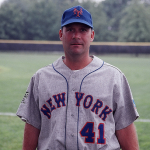 The Miracle Mets shocked the Baltimore Orioles in the World Series. Seaver, who went on to the Hall of Fame, finished his career with the Red Sox.

Beginning with the 2002 Oldtime Baseball Game, American flags were added to the back of our throwback uniforms in memory of the victims of the September 11, 2001 terrorist attacks. This uniform was worn in the 2002 Game by Northeastern University infielder Jamie Williams, whose brother Kevin was among those killed at the World Trade Center. In Kevin’s memory the Williams family established the Kevin Williams Memorial Fund, to which the Oldtime Baseball Game sent a donation. And, yes, Jamie chose this uniform because he grew up a Mets fan.