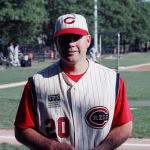 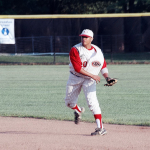 Robby played 10 of his 21 seasons in Cincinnati, and was an 11-time all-star. He eventually became the first African-American manager in the major leagues.

Two players who have worn this uniform went on to play independent minor-league baseball. Junior Medina of Stonehill College (’00) played for Adirondack of the Northern League, and Anthony Del Prete of Suffolk University (’01) played for the North Shore Spirit.