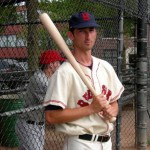 This is the actual uniform worn by Radatz at the 2002 celebration of the life of Ted Williams at Fenway Park. Radatz, one of the greatest relief pitchers in Red Sox history, threw out the first pitch at the 1997 Oldtime Baseball Game.

Owned by the Boston Red Sox and on loan to the Oldtime Baseball Game, this is the actual uniform worn by Dick Radatz at the celebration of the life of the late Ted Williams at Fenway Park in 2002. Radatz, who died in 2005, threw out the first pitch at the Oldtime Baseball Game in 1997. Former Red Sox pitcher Jim Corsi wore this uniform in 2002 and 2003, and Steve DeOssie, who played for the victorious Dallas Cowboys in Super Bowl XXV, wore it in 2004. Terry Doyle of Boston College, who wore it in 2006, was selected in the 37th round of the 2008 MLB draft by the Chicago White Sox. He went on to play nine seasons of professional baseball, including parts of five seasons at the Triple-A Level.

It was worn in 2010 by Mass College of Liberal Arts pitcher James Greeley, who made Oldtime Baseball Game history by becoming the only player to win the MVP award a second time. After first winning the award in 2006, he pitched three shutout innings and banged out two hits in 2010. He also wore it in 2011.