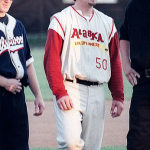 One of the better-known teams from the famed Alaska Summer League, the Goldpanners are based in Fairbanks. Among the future major-leaguers who played for the Goldpanners are Tom Seaver and Bill Lee. Uniform introduced to the Oldtime Baseball Game in 2005.

Making its Oldtime Baseball Game debut in 2005, this uniform was worn by Steve P. Buckley of Holy Cross.