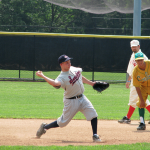 The uniform is an actual hand-me-down from the 1960 Washington Senators of the American League, and was worn by outfielder Dan Dobbek, whose name is stitched inside the shirt. Dobbek appeared in 100 games for the 1960 Senators during the parts of three seasons he played in the big leagues. When the Senators relocated to Minneapolis after the 1960 season and were reborn as the Minnesota Twins, their old road uniforms were passed on to the Middleboro Senators, a farm team for the Expansion Washington Senators that replaced the old Senators in 1961.

Joining our collection on loan for the 2007 Oldtime Baseball Game is a uniform with a storied history. Not just a re-creation, this is the actual road uniform top that was worn by Paul “Lefty” Wennik when he played for the Middleboro Senators of the Appalachian League in 1961.

Wennik was signed by the Washington Senators and played one season with Middleboro following a stellar career at the University of Massachusetts. Wennik has held onto the uniform top over the years; when he was inducted into the UMass Sports Hall of Fame in 2007, he – and his uniform – were invited to the Oldtime Baseball Game.

Cambridge native Bobby Fournier of Salem State College wore it in 2007, and again in ’08 and ’09.