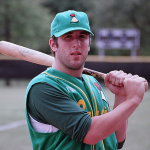 Introduced to the Oldtime Baseball Game in 2009, it was first worn by Matt Gedman of the University of Massachusetts, who christened it by hitting a home run. Gedman’s father, Rich Gedman, played for the Boston Red Sox and was their catcher in the 1986 World Series. Matt wore it again in 2010.