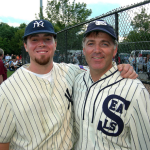 Mickey Mantle hit 536 career home runs during his career with the New York Yankees, and 18 more in his 12 trips to the World Series.

Jeff Maier became an overnight celebrity during the 1996 American League Championship Series when the then 12-year-old turned a fly ball by the Yankees’ Derek Jeter into a home run by reaching out of the bleachers and deflecting the ball. Ten years later, after becoming the all-time hits leader at Wesleyan University, he wore this uniform in the 2006 Oldtime Baseball Game. He came back to don this uniform again in 2008. Former New York Yankee Mike Pagliarulo, who made four appearances in the Oldtime Baseball Game, wore it in 1999. He wore it again as a coach in 2010.

Phil Rizzuto wore this uniform in 2011. No, not that Phil Rizzuto. This Phil Rizzuto is a native of Cambridge who in 2011 was a student at Lesley University and part-time sportswriter with the Cambridge Chronicle. A former member of the Cambridge Babe Ruth League, Rizzuto played in the 2011 Game and wrote about his experiences in the Chronicle.