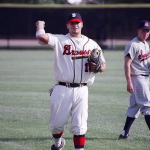 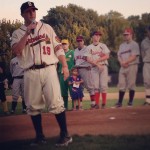 Though he signed with the old Boston Braves in 1952, it wasn’t until 1957 that Walpole native Joe Morgan made it to the big leagues with the Milwaukee Braves.

This is the actual uniform worn by Joe Morgan when he managed in the Oldtime Baseball Game in 1998. Though he was originally signed by the Boston Braves in 1952, it was with the Milwaukee Braves in 1957 that he made his major-league debut. But Joe wanted to wear a Boston Braves uniform for the Oldtime Baseball Game, so we gave him a Boston uniform with his Milwaukee No. 19. Ben Crockett of Harvard University, who wore it in 2000, was later drafted by the Colorado Rockies and now works in the front office of the Boston Red Sox. Jeff Mackor of Boston College (2001) was later drafted by the Houston Astros. Zak Farkes of Harvard University (2003) was later drafted by the Red Sox. Tom Fitzgerald, after closing out a 17-season playing career in the National Hockey League, including the 2005-06 season with the Boston Bruins, wore it in 2006.