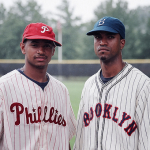 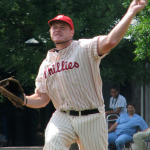 Robin Roberts went 20-11 for the National League pennant winners. The late Eddie Waitkus, who grew up in Cambridge, was a member of this team. Also known as the Whiz Kids.

Nate Freiman of Wellesley and Duke University, who wore this uniform in 2005 and ’06, was later drafted by the San Diego Padres and in 2013, by then playing for the Oakland A’s, became the third alum of the Oldtime Baseball Game to play in the big leagues. Ryan Edell of the University of California/Irvine (and, later, the College of Charleston), made his Oldtime Baseball Game debut in this uniform in 2001. He would make a total of four appearances in The Game before being drafted by the Cleveland Indians in 2005. John Gorman of Norwood and Boston College, who wore it in 2014, was drafted by the A’s in 2015.