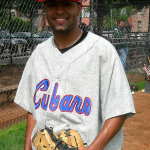 Champions of the Class B Florida International League. It’s been said that their biggest fan was a fellow named Fidel Castro.

Former Temple University baseball player Chris Collins, later a sportscaster with NECN and Comcast SportsNet New England, was wearing this uniform in 2002 when he faced his good friend Jim Corsi, the former Red Sox pitcher, in a much-publicized grudge match. Collins, who vowed to make contact, did just that: He grounded out. In 2005, it was worn by then-Boston Red Sox assistant media relations director Mark Rogoff, who had been a high school baseball star in San Diego. Rogoff went on to become media relations director of the Washington Nationals.