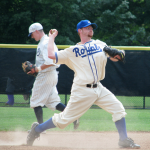 The Royals, playing in the International League, were the top farm club of the Brooklyn Dodgers. Robinson led the IL in hitting with a .349 average in 1946 before making his historic ascent to the Dodgers in 1947.

Added to the Oldtime Baseball Game in 2009, it was first worn by Patrick Murphy of Wareham High School. Murphy had been recommended to The Game by longtime Cape Cod League board member John Wylde shortly before his death on February 23, 2009.