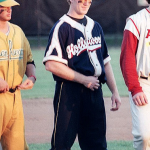 This navy blue uniform from the Pacific Coast League features chenille lettering and the number on the back encased in a star. Wearing No. 4 for the Stars in 1941 was second baseman Ham Schulte, who one year earlier played in the major leagues for the Philadelphia Phillies. The top was made by Ebbets Field Flannels in Seattle. The pants were tailored by the one, the only Amar of Royal White Laundry in Somerville.

Jeff Allison of Peabody, who first appeared in the Oldtime Baseball Game in 2002 and in 2003 was selected in the first round of the amateur draft by the Florida Marlins, wore this uniform when he made a return to the game in 2012 following the end of his professional playing career. He also wore it in 2013.