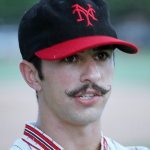 It has been argued that Cuban-born Martin Dihigo, who managed the New York Cubans to the Negro League World Series championship in 1947, was the greatest all-around player in Negro League history. He won more than 260 games as a pitcher and consistently hit better than .300. He was inducted into the Baseball Hall of Fame in 1977.

Few participants in the history of the Oldtime Baseball Game have grasped the symbolism of our throwback uniforms as Alex Lee of Wofford College did in 2010. Lee, whose father is a native of Cuba, not only asked to wear this uniform but also devoted several months to growing an old-style handlebar mustache to bring some added flavor to his participation. He also wore it in 2011. Lee returned to the Oldtime Baseball Game in 2013 as a player/coach and wore this uniform.

Jimmy Ricoy of UMass/Lowell wore this uniform in 2015 in honor of his grandfather, a native of Cuba.