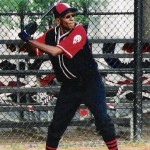 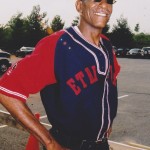 Originally from Miami, this famous barnstorming team from the Negro Leagues moved to Cininnati in 1943. The Ethiopian Clowns were heralded more for their on-field shenanigans than their stellar play.

Worn most famously by former Red Sox pitcher Dennis “Oil Can” Boyd in 2004. He was to have pitched one inning; instead, he worked four innings, the only blight on his record being a home run by Zak Farkes of Harvard. Omar Pena of Northeastern University, who wore it in 2000, was drafted by the St. Louis Cardinals in 2003; Dorian Rojas of Cumberland University, who wore it in 2006, went on to play professionally for the independent Macon Music. In one of The Game’s quirkier moments, Nick Dell’Anno wore the 1951 Bobby Thompson New York Giants uniform during opening ceremonies in 2007, but then was switched to the road team and banged out a hit wearing the uniform of the famed Ethiopian Clowns.