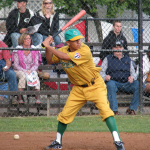 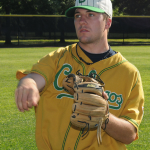 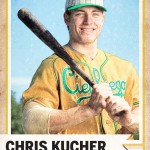 This famous Cuban baseball team represented the port city of Cienfuegos, but played its home games in Havana. Their symbol was the elephant, and their slogan was, “The pace of the elephant is slow, but crushing!” Luis Tiant, Sr., father of the former Red Sox great, starred for the Elefantes. Uniform introduced to the Oldtime Baseball Game in 2005.

Its bold colors having made it an instant favorite when it was added to The Game in 2005, it was first worn by Matt Nuzzo of Brown University. He was to have worn it in 2006, but had to bow out because Brown’s football team, for which he also played, had begun training camp. The uniform thus went to a fellow Ivy Leaguer, Dan Neczypor of Columbia University. When both players wanted to wear the popular uniform in 2007, it was agreed that the winner of the season series between Brown and Columbia would earn rights to it. Brown won the series, and Nuzzo wore it in 2007, and again in 2008. (Neczypor’s consolation prize was the honor of wearing the Hollywood Stars uniform, which debuted in 2007.)

In the fall of 2012, former Wheaton College lefthander Chris McDonough saw his playing career come to an end when he broke his arm while throwing a pitch in a Yawkey League All-Star Game. Ironically, his pitching career ended where he always dreamed of playing – at Fenway Park. McDonough, a native of Weymouth, Mass., was invited to play in the 2013 Oldtime Baseball Game and wore this uniform. In a break with tradition, the designated hitter rule was used for the first time since 1997 so that McDonough could play.