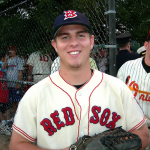 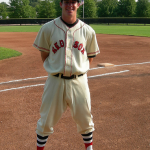 Ted Williams patrolled left field for the Red Sox for 19 seasons, taking time out to serve his country in World War II and Korea. He’s the last man to hit .400 with a .406 mark in 1941.

Players who have worn Ted Williams’ fabled No. 9 in the Oldtime Baseball Game have enjoyed a measure of success that would have made the Splendid Splinter proud. Steve Langone of Boston College, the first to wear it, hit a gamewinning home run in 1998, earning co-MVP honors. He went on to be drafted by the Los Angeles Dodgers. Todd Korchin of Northeasten University (’01-02), Damian Costantino of Salve Regina University (’03) and Zak Farkes of Harvard University (’04) also hold the distinction of hitting home runs and earning MVP honors while wearing No. 9. Farkes, whose home run was off former Red Sox pitcher Oil Can Boyd, went on to be drafted by the Sox. Dan Morse of the Tufts University, who wore it in 1999, played professionally for the independent Johnston Johnnies. The uniform was displayed on the outfield fence during the 2002 Game in memory of Williams, who had passed away that summer.

In 2012, former Boston College captain Pete Frates was wearing this uniform during pre-game ceremonies when Red Sox general manager Ben Cherington made a surprise appearance and presented Frates with a No. 3 Jimmie Foxx uniform to wear. Frates, who had recently been diagnosed with Lou Gehrig’s Disease, had worn No. 3 his entire career and thus was able to wear the Foxx uniform when he made a “symbolic” start at first base. The No. 9 Ted Williams uniform was switched over to Skip Flanagan of the Rochester Institute of Technology, who emerged as MVP of the 2012 Oldtime Baseball Game. He also wore it in 2013, ’14 and ’15.

Winthrop native Joe Skoczylas, who wore it in 2017, did so with an added dose of nostalgia: He also wore an actual pair of game-used pants formerly owned by none other than Ted Williams. The pants had been handed down to him by his late grandfather, also named Joe Skoczylas, who had acquired them from a friend who worked for the Red Sox.