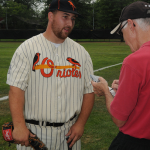 One of the greatest second basemen in history, Rogers Hornsby, also known as the Rajah, later managed the International League Orioles.