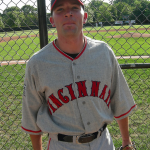 The only pitcher in Major League history to throw back-to-back no-hitters. On June 11, 1938, he no-hit the Boston Bees at Crosley Field. Four nights later, in the first night game played at Ebbets Field, he no-hit the Brooklyn Dodgers.

Ben Crockett of Harvard University, who wore this uniform in 2001, was later drafted by the Colorado Rockies and now works in baseball operations for the Boston Red Sox. Rising Boston comedian Graig Murphy, who wore it in 2006, is known to listeners of WEEI’s The Big Show for his impressions of Patriots owner Robert Kraft, former Red Sox manager Terry Francona and other local sports celebrities.