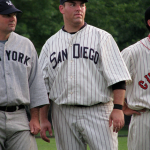 Two years before he made his major-league debut with the Red Sox, the future Splendid Splinter socked 23 homers and drove in 98 runs for his hometown San Diego Padres of the Pacific Coast League.

Introduced to the Oldtime Baseball Game in 2009, this uniform was worn in 2014 by Matt Antonelli, a veteran of the big-league San Diego Padres. A native of Peabody who played his college baseball at Wake Forest, Antonelli played 21 games for the Padres in 2008. He hit a home run off the Colorado Rockies’ Jason Hirsh on Sept. 15 of that season. He wore it again in 2015