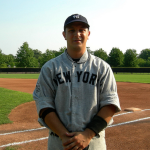 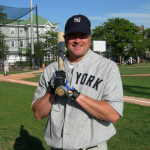 The Iron Horse played in 2,130 consecutive games during his illustrious career with the Yankees. He succumbed to Amyotrophic Lateral Aclerosis (ALS), now commonly known as Lou Gehrig’s Disease.

Fittingly, this uniform was first worn in the 1998 Game by a man who was himself a former New York Yankee, Medford native Mike Pagliarulo. He wore our Mickey Mantle home Yankees uniform in 1999, and returned to the Lou Gehrig road uniform in 2000. This uniform was also featured prominently in the 2003 Game, as it was worn by Matt Bruning, an ambidextrous pitcher from Harvard University. Pitching right-handed, he worked one shutout inning for the home team in the Mickey Mantle uniform, and then switched into the Lou Gehrig uniform and submitted a shutout inning from the left side. Paul Devlin, at the time a reporter for NESN, wore it in 2006. Devlin, a former minor-leaguer baseball player, had a small but significant role in the film Bull Durham: He’s the batter who gets a heads-up from catcher Crash Davis (Kevin Costner) that a fastball is on the way.