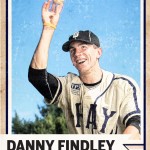 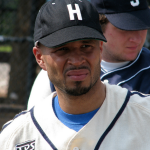 Josh Gibson, who is in the Hall of Fame, was the greatest offensive player in Negro League history and was known as the Black Babe Ruth.

When throwback uniforms were introduced to the Oldtime Baseball Game in 1998, the first player to represent the Homestead Grays was Sean McGowan of Boston College. And he did so in spectacular fashion, hitting a game-tying home run, earning co-MVP honors with BC teammate Streve Langone. McGowan went on to be drafted by the San Francisco Giants and played in the minor leagues both for the Giants and Red Sox. Matt Keating of Northeastern University, who wore it in 1999, would also be drafted by the Giants. Josh Klimkiewicz of Harvard University, who wore it in 2003, went on to play professionally for the independent El Paso Diablos.