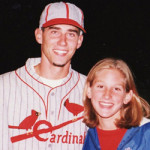 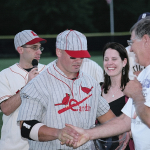 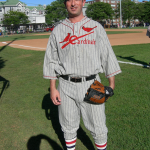 After beating out the Reds and Pirates to capture the National League pennant, the 1926 Cardinals beat the New York Yankees in a thrilling World Series, with Grover Cleveland Alexander fanning Tony Lazzeri in the seventh inning with the bases loaded.

Greg went on to be selected by the Boston Red Sox in the fifth round of the 1999 amateur draft, and in 2001 was the organization’s Minor League Pitcher of the Year. A recurrence of cancer ended Greg’s baseball dreams, but he continued to be an inspiration to his family, friends and teammates. Such was the love and respect Greg earned over the years that when he died, on August 21, 2009, Carlos Pena, then of the Tampa Bay Rays, who played with Greg at Northeastern University, dedicated his next game to him. And in dramatic fashion: Pena, who played in the Oldtime Baseball Game in 1996 and ’97, went 3-for-4 against the Texas Rangers, with two home runs.

“He was my right hand in college,” Pena said after the game. “He had been battling cancer for 10 years. He was always smiling. The only thing that comforts me is I know he’s in a better place, but we’re going to miss him greatly. I dedicated this game to his memory and his family.”

Then-Red Sox first baseman Kevin Youkilis, who played with Greg in the minor leagues, also dedicated the next game in which he played to his former teammate. He went 3-for-5 and also hit two home runs.

“When I pointed to the sky to him when I went to the dugout, that was for him,” Youkilis told reporters. “That’s one of those things. There are some crazy things that have happened in my life where you always feel there’s somebody out there pushing balls out and doing great things for you.”

Former Boston College star Steve Langone, now an advance scout with the Red Sox, continued the tradition when he wore Greg’s uniform and played in the 2011 Game after receiving the Montalbano Award. Langine originally played in the Oldtime Baseball Game from 1995 through 1999, hitting a home run in 1998.

Medford native and Framingham State alum Orazio Azzarello wore Greg’s uniform and pitched a scorless iinning in the 2012 Game after being honored with the Montalbano Award. It was the eighth OTBG appearance for Azzarello, who originally played from 1995 through 2001.

Former Stonehill College star Junior Medina, who played in the game in 2000 and 2001, was the 2013 recipient of the Montalbano Award. However, he was forced to leave the game when he suffered a hand injury in a home plate collision with Bowdoin College catcher Dan Findley.

In 2014, the Montalbano Award was presented to Pete Frates, whose battle with ALS (Lou Gehrig’s Disease) inspired not just the Ice Bucket Challenge but our own decision to play the 2014 Oldtime Baseball Game as a fundraiser for the ALS Therapy Development Institute of Cambridge. With Pete wearing his own No. 3 Red Sox shirt and serving as an honorary coach, Greg’s uniform was worn by 2012 Montalbano Award recipient Orazio Azzarello, now a coach in our game.