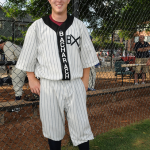 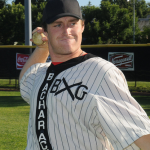 Based in Atlantic City, the Bacharach Giants won the Eastern Colored League pennant in 1926 and 1927, led by player-manager Dick Lundy. In both cases they lost the Negro League World Series to the Chicago American Giants.

John Gorman of Norwood and Boston College, who wore this uniform in 2012 and ’13, was selected by the Oakland A’s in the 31st round of the Major League Baseball amateur draft in 2015.

Introduced to the Oldtime Baseball Game in 2009, it was first worn by Sam Shaughnessy of Boston College.