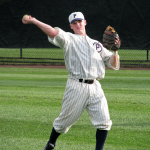 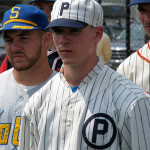 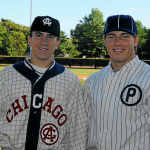 After being sold by the minor-league Baltimore Orioles to the Red Sox, a 19-year-old named Babe Ruth was sent by the Sox to play for the Providence Grays of the International League, helping the Grays to a first-place finish.

Chris Shaw of Lexington and Boston College, who wore this uniform in 2013, was selected in the first round of the Major League Baseball amateur draft (31st overall) by the San Francisco Giants in 2015. Introduced to the Oldtime Baseball Game in 2009, it was first worn by Charlie Pagliarulo of Bentley College. Pagliarulo’s uncle, former New York Yankees star Mike Pagliarulo, played in the Oldtime Baseball Game from 1997 to 2000. In 2010, Charlie went on to play professionally for the independent Laredo Broncos, and had the distinction of being released when the team signed former major-leaguer Jose Canseco. Matt Paré of Portland, Maine, and Boston College, who wore it in 2012, signed with the Giants in 2013.