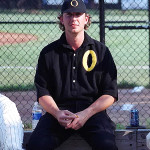 The 1901 Baltimore Orioles was managed by John McGraw before he went on to a storied career with the New York Giants. The Orioles relocated to New York and became the Highlanders, and, eventually, the Yankees.

Former major-league infielder Lou Merloni, who played six seasons wirh the Boston Red Sox, wore this uniform when he came out of retirement to play in the 2008 Oldtime Baseball Game. The Framingham native, now a popular talk-show host on Sports Radio 850 WEEI, had a double in his first at-bat. Brian Macchi of Boston College wore it when he was named MVP of the ’99 Game. He went on to play professionally for Johnstown of the independent Frontier League. Harvard University pitcher Ben Crockett (’99) was later drafted by the Colorado Rockies, and Josh Klimkiewicz (’05), also of Harvard, played for the El Paso Diablos of the independent American Association.